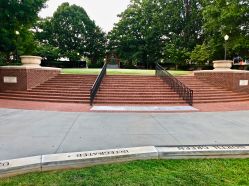 I was scheduled to fly out at 3pm today, which would have had me in DC by 4:30.  This means I would have been fighting the god awful rush hour traffic, easily adding another hour or two to my already longish journey.  The repercussions of having to go through two heavily travelled areas to get home.  The shuttle from the school left at 10am which means I would be waiting at the airport for about 3 hours, which I was planning on and was ready for.  When I checked my bag, which I was planning on just carrying it on, but at the last second decided I didn’t want to tote it around the entire time, I was informed that I could catch a flight, that had been delayed, if I wanted to.  It was starting to board then, and it would get me in to DC at 1, so I had to decide quick.  Well that was a no brainer.  2 hours later I am in DC, and manage to find away to get back home with as little disruption as possible.  All made easier with the kindness of my daughter, who happened to have the day off.  I posted a photo of the bell in the second photo, on Monday.  This is the gorgeous view from the other side.  I wanted to get back here this morning to get this photo as the ones I had taken previously didn’t come out the way I wanted.  So many places on this campus that I could have easily seen myself escaping to to “destress” when I was in college.

Look Who I Found

2 Replies to “Something In The Air”