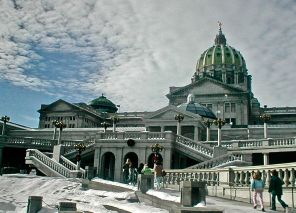 The two Cathedral photos above were taken a few years back, on one of my kids DC field trips.  I went in to my collection because, even though I could have weaved Frank’s prompt in either humorously or with local flavor, I wanted to really present something that had a profound effect on me.  I don’t know why, but I was moved emotionally so much on this visit.  It was one of those prime memories that is cherished and continues to have an effect on me.  Even if I tried to do one of those artsy trick photo shots with the statue in the middle that failed horribly (thank you cropping) it’s why it’s a little more grainy than I would like, but it still harbors the memory.  The truck on the bottom, was taken today, and I was just amazed how clear it is despite me going 65mph and the truck doing the same in the opposite direction. I didn’t even have to wait for it.  Not only is it ferrying cargo, but it’s a rolling billboard as well! Not the prototypical sign, but a sign none the less.

7 Replies to “Take Me To Church”