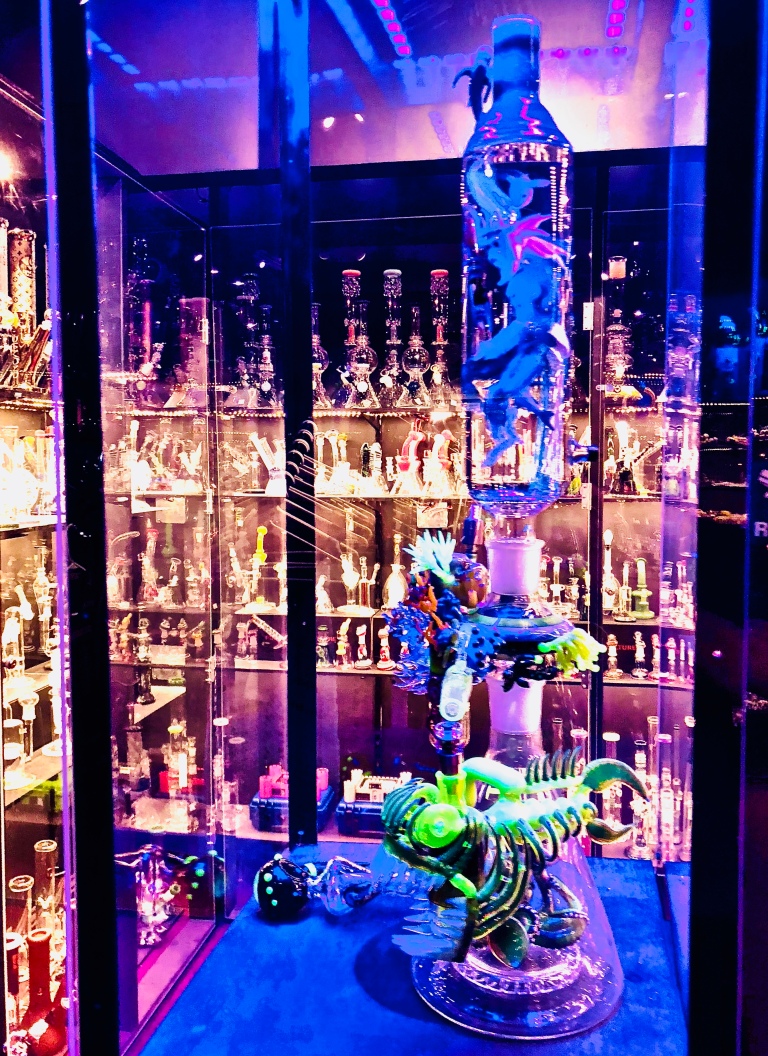 These last two days have been very accommodating to me in that the prompts I used had a solid connection.  Looking at today’s words I feel like a tourist at a Amish Smorgasbord (Trust me, I know that of which I speak). So hang in there with me as I navigate my way through the attempt to link the prompts to the photo.  I just happened upon this piece by total accident.  I was in town looking for photo ops, when I decided I needed to grab a refreshment in order to continue my adventures.  I just finished eating and set out, feeling rejuvenated, to find todays post. All of a sudden the clouds darkened in a stark contrast from the bright sun filled sky.  Before I knew it, the skies opened up, and when I say opened up, I mean it was like a dam bursting.  There was absolutely no place I could be, without  ending up looking like a drowned rat.  Two buildings up was a shop I hadn’t ever been in, but I had this epiphany so I went in, hesitantly.  Once in I realized I was in this vape shop that sold items that would make Spencer’s look like a rogue Toys-R-Us. By this point I had no choice, so I meandered about, and made it appear that I was very interested in the stores contents as not to be called and then kicked out.  As I walked toward the back, things became very interesting, in a good way.  There was an abrupt change of lights, from the business incandescent to the deep saturated UV black light where my first thought was “light the night”.  I found myself surrounded by glass, literally.  Glass pipes lined the multi tiered shelves and there were 3 large glass enclosed curio cabinets.  Each of the cabinets held a piece of glass, the smallest coming in at 52″.  Each glass pipe was meticulously hand blown, designed and sculptured and painted in such amazing detail. I literally stood in front of each, for no less than 10 minutes, gazing at the detailed intricacies of each pipe.  I grabbed my camera and ended up choosing this one because, well frankly I wanted to post the photo so there is a sense of what I saw.  And this one had fish, and I knew that fish was a prompt for one of the challenges.  I had such a hard time finding the right camera settings and ended up using the iPhone photo because it produced the best one.  After a good half hour, the storm had passed and the sky once again was bright and clear. I headed out of the shop with the photo that answered each prompt, a little sketchy but still…. Oh and by the way if you wanted to purchase one of the glasses, the cheapest would only set you back $1200.

You Can Just Smell Them

31 Replies to “Stick That In Your Pipe”