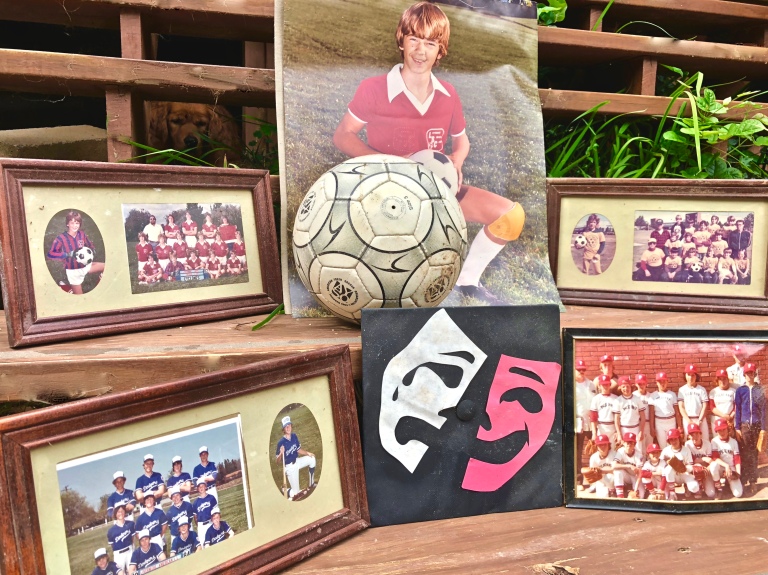 This combination of prompts was a fun challenge to set up.  I was out cleaning the garage a little bit, not that there is any possibility of it ever being more than a little bit, when I stumbled across some things my parents brought with them when they came out a couple of weeks ago.  One of the first thoughts that came to mind, while looking at these artifacts, were the vivid images of an age when possibilities were endless.  The memories came flooding back, which is a major deal since I have to smell my armpit to check to see if I had already put deodorant on not 10 seconds after I just did. Some of the best times I had growing up were playing sports.  As an army brat it was very difficult meeting new friends (because of moving so much) and playing sports helped to bridge that gap.  It especially helped, being good at the sport, because then everyone wanted to hang out with you.  And man did I love playing.  Ironically I wrote about this yesterday, so it is keeping a theme with the whole World Cup thing.  It isn’t the most interesting of photos.  I am sure there are those who are asking whats up with the theatre masks on the motor board.  I was/am in complete awe that my mom kept my college headdress which was included in the pile of memory producing artifacts. And, as some of you may know, theatre is another passion.  I include it because I always say theatre is a contact sport.  And I am living proof because I have had more emergency room visits from theatre injuries than I have from sport injuries. That is a subject for a future post. There is another pretty cool thing happening in the photo which is why I chose this one over the others I took.  You have to look carefully. The answer will be revealed below following my entry for June Squares, after the 3.  SPOILER ALERT- It also satisfies the “roof” aspect of the challenge.

The Internet is for…

And… as promised (my entry for todays #Junemonthofsquares)